Can We All Just Chill Out?

Can We All Just Chill Out?

Published on February 20, 2013 by Spydersvenom in editorial 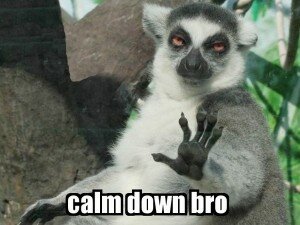 Tonight Kansas City, where I live, is going to be hit with a snowstorm that is being nicknamed “Snowmageddon 2013” by locals.  People are seriously freaking out.  Honestly in comparison to the storm that hit the East Coast, its pretty tame, with 3-6 inches expected and as much as double that worst case scenario.  To hear people at the grocery store or workplace talk about it, though, you’d think these puffy flurries were going to sneak into my house and kill my baby daughter.  As I amuse myself with the frantic rantings of co-workers who refer to coming into work tomorrow as the seventh circle of Hell, I noticed a similarity between Snowmageddon and games: there’s an awful lot of barking about things that just don’t matter.  Speculating and talking about them means nothing.

Let’s cut the bullshit, gaming is a hobby, pure and simple.  It may be a lot more thrilling and dedicated than, say, a bottle top collector (although I’m sure I can be proven wrong on that), but it’s still a hobby that few can actually do as a job.  Furthermore, there’s a disconnect that enthusiast press journalists play games for a living.  This is incorrect, they write for a living.  Sure, their jobs include playing and completing video games, but they aren’t always playing what they want and they are very much writers first and gamers second.  The only people I can think of that play games for a job are MLG and other similar electronic sports – I would argue that all of those guys are playing games they love like Halo and Call of Duty – that are as uncommon as basketball and baseball sports stars.  For the rest of us, it’s just a way to spend our free time and it does this wonderfully.  Lately, however, it has this negative ring around it that has snuck its way into everything from message boards to more friendly communities.  People seem to love to bitch and speculate on the games industry instead of appreciate the here and now.

It’s our own fault.  Media sites write about what gets hits and games we won’t see for two years get more hits than anything else.  When a game comes out, the hardcore consume it, digest it, and shit it out in a massive waste of negativity spanning across message boards and giving the impression that it is the opinion of the many, when in fact it’s the rantings of few.  Furthermore the incestuous relationship of the enthusiast press has slimmed down to a bunch of guys (great guys, mind you) that all have similar tastes and tend to have similar opinions on the newest releases.  This is where it all seems to fall apart.  Take Aliens: Colonial Marines for example.  It’s not a good game from a technical standpoint, far from it, I could wail all day on the technical mess, mock the xenomorphs that in the campaigns best level look like they’re dancers from the video Walk the Dinosaur, and go on tangents about the piss-poor 90s level design.  Still, it’s kinda fun, especially for $2 a night at a Redbox.  That’s not what people are focusing on, though, they’re all demanding for explanations from Gearbox about why the game sucks, what went wrong in development, and the legal responsibility of showing a demo that doesn’t look, act, or feel like the finished product.  Face it, Gearbox lied and released a shitty product.  Tough.  It’s not like we weren’t warned, save EGM and the Guardian the game was slammed on the review front as it rightfully should have been.  Here on the B-Team I did give it a semi-favorable review, but I’m just a 31-year-old father that kills some time on a Tuesday night while everyone’s asleep, killing ANYTHING is cathartic – and thus enjoyable by my perspective – at that point.  Additionally it was shelled out to Redbox on both 360 and PS3 for your renting enjoyment, and might I add super easy to find in stock, and I was even stunned to hear a GameStop employee warn an unassuming gamer that the title was receiving poor marks and Game Informer had yet to cover it in the magazine.  If you bought Aliens: Colonial Marines and didn’t know it had a reputation for being shit, you weren’t paying attention.

This doesn’t mean that Randy Pitchford should have to show up in public for a massive assault.  Who didn’t think the game had little going for it anyway?  Back in 1995 I purchased Samurai Showdown on Sega CD and a rushed bug in the game prevented you from beating it!  Knights of the Old Republic 2 shipped on Xbox and PC without an ending, as did some weird Star Trek game that Europeans take a liking to on 360.  This is a business, it has rules, money, and deadlines to worry about.  Gearbox knew that Borderlands 2 and several other titles had more potential and prioritized them as such.  Does that mean it’s fair?  No.  Does that mean it’s right?  No.  Is it illegal?  I’m not a lawyer…but possibly.  Either way, calm down, life will go on.  Like that time you got caught naked getting out of the shower by a relative, we’ll all laugh this off next generation like, “remember how bad Aliens: Colonial Marines was?”  It’s not that big of a deal, either play it or don’t, stop talking about what should have been.

Another big debate is what will change in the next generation of consoles, which I am super guilty of getting wrapped up in.  Probably the biggest debates being whether or not this will be the last generation of consoles ever and if used gaming is out or not.  It got so bad that people I was speaking with on both sides of the debate were getting upset and depressed about the future of gaming.  I had to take a step back and realize that all this speculation is not good, it’s not even conversational, it’s negative.  We don’t know what the hell the upcoming generation will bring, and Sony sure as hell aren’t going to reveal it at the announcement tonight, I can promise you that.  No, it’ll be buried in some pre-launch interview where Tretton or someone will say, “yes we are linking consoles to individual discs,” and that will blow up to be the story of the week.  It may not happen and like so many other predictions of the past – like the world ending – will prove to be elaborate thoughts that wasted hundreds of hours and unnecessary worry.  The point is: it’s supposed to be fun, don’t get so wrapped up in the hype.

Also, what in the world do we have to complain about?  There’s a slew of great games that have come out since the beginning of 2013 alone – Dead Space 3, DMC: Devil May Cry, and apparently I’m going to eat some crow on my hate towards Metal Gear Rising – let alone the endless library going back only one year.  Gaming is as alive at it has ever been and we don’t take a time to appreciate it, we will spend our lives buying into the hype train and taking the bait of ruthless Internet trolls.  Do me a favor, put down the keyboard, pick up the controller, and play some damn games.

Oh and I’m getting pretty sick and tired of critical darlings, it’s fine if you dig the game but don’t feel obligated to finish it just because “everyone else” loves it.  Also defend those much hated titles you love, it’s your choice after all.

Please note that these editorials are solely the view of the author, Fred Rojas, and are not necessarily the opinions of the B-Team or any of the other hosts.  In fact most times, the guys think I’m bat shit crazy.